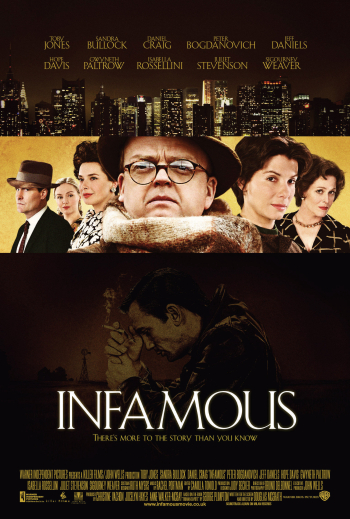 Delayed in its release due to the bizarre coincidence of Bennett Miller’s "Capote,"
"Infamous" (written and directed by Douglas McGrath) covers the same period of Truman Capote’s life when he set out to create a new kind of literary novel based on the brutal killings of a family in Kansas.

In spite of its similarities to Miller’s film, "Infamous" conveys other aspects of Capote’s research into the minds of the killers (played by Daniel Craig and Lee Pace). Douglas McGrath interjects interview sequences with Manhattan literary figures that impart crucial information in elegant clips.

But it is Toby Jones’ uncanny portrayal of the short, effeminate writer with the funny voice that gives the film its credibility and compassion. Sandra Bullock does a surprisingly powerful turn as Capote’s confidant Nelle Harper Lee. "Infamous" is an essential companion film to "Capote."