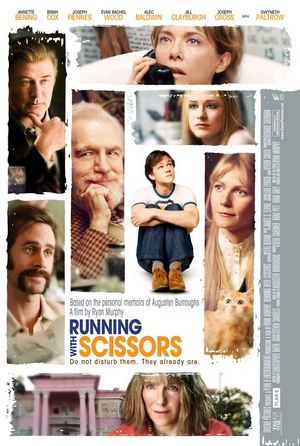 Based on Augusten Burrough’s memoir, "Running With Scissors" traverses the ‘70’s American zeitgeist in eccentric personal terms when the American dream plummeted into horror with the aid of prescription drugs. Talented newcomer Joseph Cross does the honors as Augusten, a would-be Holden Caulfield character embattled by his wrongheaded mother Deirdre (played with self-deprecating esprit by Annette Bening).

Deirdre specializes in writing navel-gazing poetry to the exclusion of shouldering familial duties to her alcoholic husband Norman (Alec Baldwin) or her sensitive son. After falling under the divisive spell of her kooky therapist Dr. Finch (Brian Cox), Deirdre abandons Augusten to the mad doctor’s dilapidated house where his dog-food-eating wife Agnes (Jill Clayburg) and traumatized children live out bizarre rituals of spastic interaction.

Augusten struggles with his budding homosexuality while Deirdre distantly "recovers" from her erratic neurotic condition. Stripped down for its transition from book to script, "Running With Scissors" is a satisfying wry dramatic comedy.