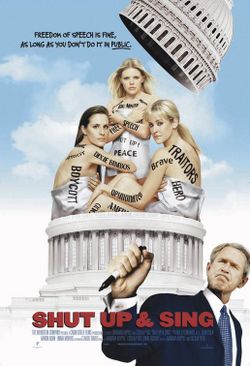 Famed documentarian Barbara Kopple ("Harlan County U.S.A.") fails to provide adequate political and social context to events surrounding singer Natalie Maines’ public remark in a London auditorium that she was ‘ashamed that the President was from the state of Texas.’ It’s common knowledge that the offhand comment effectively ruined the Dixie Chicks’ musical career compared with their enormous previous success, but Kopple and her co-director Celia Peck do little to expose the mentality and actions of those responsible for bringing the genial band low. The most inspiring element of the film is the genuine fortitude and loyalty that Maines and her bandmates Emily Robinson and Martie Maguire exhibit outwardly and to one another.

Listed below are links to weblogs that reference Shut Up & Sing: