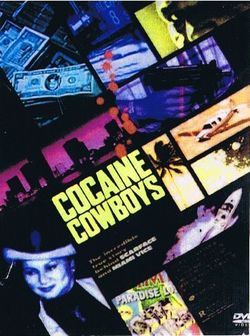 Brian De Palma’s "Scarface" didn’t begin to scratch the surface of the real violence and depravity that consumed Miami during the ‘70s and early ‘80s era of Colombia’s Medellin cocaine cartel. Documentarian Billy Corben’s revealing film exposes the methods and players in South Florida’s drug trade that literally built the city of Miami that we know today with billions of dollars in blood cash. Corben’s exhaustively researched film utilizes news footage, along with interviews with former drug traffickers and assassins, to give a clear dissertation on a brutal and vile chapter of American history that condemned Miami to what Time magazine called "Paradise Lost" in 1981. Television’s "Miami Vice" composer Jan Hammer provides the film’s infectious musical score.

Listed below are links to weblogs that reference Cocaine Cowboys :