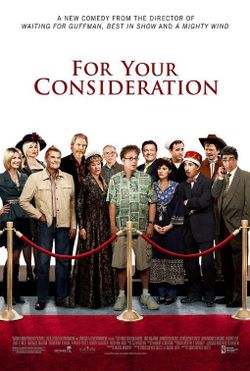 The comedy team behind such gems as "Waiting For Guffman" and "A Might Wind" hit a rut in this mediocre movie about the cast and crew of an independent movie called "A Home For Purim" that generates undeserving Oscar buzz and snowballs into a zeppelin of overblown hope. Absent are the polished layers of backstory and subtext that packed "A Mighty Wind" with laughs. The film-within-a-film narrative device falls flat because the inner story is a melodrama with no comic momentum of its own. Christopher Guest. Eugene Levy, Bob Balaban, Catherine O'Hara, Parker Posey, and Harry Shearer struggle to flesh out their goofy characters with improvised meaning that never gels.

Listed below are links to weblogs that reference For Your Consideration: