« Who The Fuck Is Jackson Pollack? | Main | The History Boys »

Tenacious D in The Pick of Destiny 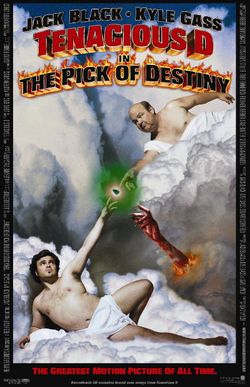 Sure their weed-friendly humor is aimed squarely at the 15-year-old boy lurking in every 35 to 45 year-old guy, but Jack Black and Kyle Gass inject more irreverent fun than the Christopher Guest team squeezed into "Spinal Tap." A teenage JB (Jack Black) escapes from his oppressive Christian father (Meat Loaf) and heads for Hollywood where he meets guitar god KG (Gass) busking on a Venice beach. JB enters into an apprenticeship under KG, and the soldiers of rock soon discover the existence of a mythic "Pick of Destiny" that will turn them into instant rock ‘n’ roll gods if they can steal it from its home in a rock ‘n’ roll museum. Ben Stiller pops up as guitar store guru and Tim Robbins adds cameo spice as a grizzled rocker. "Tenacious D" is a movie for fans of the hilarious spoof-rocking duo. You know who you are.

Listed below are links to weblogs that reference Tenacious D in The Pick of Destiny: