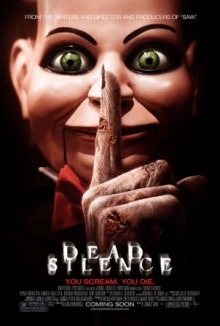 A young couple, apparently living in '70s Americana, gets a cryptic package containing a ventriloquist's dummy that promptly murders the man's pregnant wife with hideous panache. Accused of the killing by smarmy local homicide detective Lipton (Donnie Wahlberg), husband Jamie (Ryan Kwanten) takes the devil doll to his hometown to get at the root of a curse that points to a deceased ventriloquist named Mary Shaw. The detective's late model car is just one of many incongruities that plague the picture as Jamie questions the old-fashioned townsfolk, and his ruthless but wealthy father, about the hex that leads him to a deserted theater where Mary Shaw once performed. Plodding and bereft of suspense, "Dead Silence" is an irredeemable jumble of cliché genre fragments.
Rated R. 90 mins. (C-) (Two Stars)

Listed below are links to weblogs that reference Dead Silence: