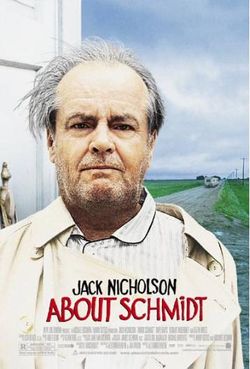 Jack Nicholson plays Warren Schmidt, a 66 year-old retired and widowed insurance man from Omaha who drives his 35-foot Winnebago cross country to foil his daughter's upcoming wedding in this insultingly dim movie based on a novel by Louis Begley and directed by Alexander Payne. The humanity that Jack Nicholson brings to his heartfelt character is so deluged by the film’s pitiable tone and dubious dramatic arc that it would be more interesting to watch Nicholson read a phone book than see him degraded as he is here. The dreary, banal and insipid Midwest world that Payne ridicules must surely mistake the director’s slurs and insults as fawning admiration if we are to believe the critics who hail this patronizing film as a masterpiece.

Listed below are links to weblogs that reference About Schmidt: