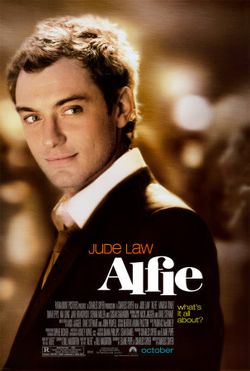 Michael Caine’s 1966 breakout performance as a swinging London stud is emulated, but not matched, by Jude Law in a predictably misjudged remake that withers where the original film blossomed. This time around, our notable British seducer is transplanted to Manhattan where his job as a limo driver miraculously finances the Prada pinstriped suits he wears as he tools around town on an endless search for female conquests. Director/co-writer Charles Shyer ("The Affair Of The Neckless") pads the movie with airy scenes of Alfie’s direct-to-audience monologues during increasingly dull scenes of Alfie’s self-satisfied skirt lifting. Where the original film gradually shifted from romantic comedy to drama before delivering a socially charged emotional TKO in the third act, Shyer’s movie confuses dialogue for plot and depends solely on Jude Law’s ever-watchable charm to do the heavy lifting. Even Michael Caine’s career would have gone nowhere if he had made this version of "Alfie."

Listed below are links to weblogs that reference Alfie: