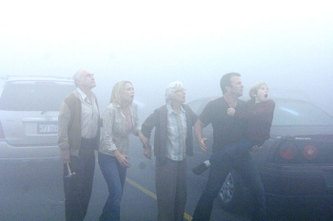 It took director Frank Darabont to write a better ending for Stephen King’s novella before he could tackle making the best true horror movie to come out in years. A father and young son become stranded in a populated grocery store in Maine where a deadly mist has enshrouded the area as part of a terrible storm. Hidden in the thick fog are gigantic insects and prehistoric creatures that ensnare the store’s inhabitants in a grip of fear that brings out their worst and best qualities. Marcia Gay Harden is magnificent as a Christian fanatic, and Thomas Jane gives the best performance of his career in a low-budget, retro horror movie that is equal parts satire, suspense, and surprise. "Stephen King’s The Mist" is a reminder of what a great horror movie is all about.

Listed below are links to weblogs that reference Stephen King’s The Mist: