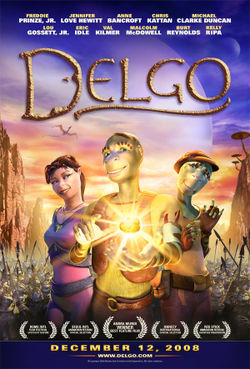 Sleep-inducing and yet excessively violent, "Delgo" is a highly derivative and bloated piece of animated sci-fi set in a fantastical world that never captures the imagination. Two races of alien tribes--the winged Nohrin and the good-guy side the Lockni--battle for control of an region called the Jhamora. It doesn't take much to see a Middle East theme, but it matters little since the writers neglect to rise above a disjointed narrative structure and pap dialogue. Fun-loving Lockni teen Delgo (voiced by Freddie Prinze Jr.) is smitten with the Nohrin Princess Kyla (Jennifer Love Hewitt), but the outbreak of war means that battle scenes are more prevalent than love scenes. Immediately forgettable, "Delgo" is a poorly written kids' movie that is unsuitable even for its target audience.

Listed below are links to weblogs that reference Delgo: