« THE CONFORMIST — CLASSIC FILM PICK | Main | The Center of the World » 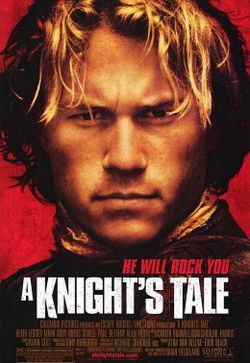 Heath Ledger does a pretty good movie-star poker face and has that rakish Australian swagger that pop movie audiences gravitate toward. Behind the failure of "10 Things I hate About You" and a near miss with "The Patriot," Ledger digs his stakes deep into a movie designed purely for teen idol gratification. "A Knight's Tale" is a cinematic defilement that plays under a banner of a "rock & roll fairy tale." Set in 14th century Europe, a crowd of period costumed spectators clap and chant to Queen's stadium rabble rouser "We Will Rock You" at a jousting tournament. What follows are a long string of '70s songs, like David Bowie's Golden "Years," playing while Ledger's William Thatcher (any relation to Margaret?), a poor commoner and former footman to a real Knight, begins his own illegal (as he is not of Royal descent) jousting career. Endless jousting tournaments transpire with lots of balsa wood jousting poles splintering across the screen. It's a classic example of a "'what-on-earth-were-they-thinking" movie that no group of filmmakers and actors could have ever pulled off with much success.
Rated PG-13. 132 mins. (C-) (Two Stars)

Listed below are links to weblogs that reference A Knight's Tale: