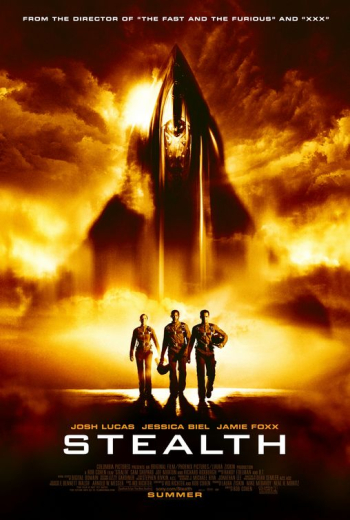 Director Rob Cohen (“The Fast And The Furious”) makes a crude Jerry Bruckheimer knock-off with a laughably insipid script by W.D. Richter (beware of screenwriters who go by their first initials). Jamie Foxx, Josh Lucas and Jessica Biel are utterly unconvincing as an elite team of naval air fighter pilots who are assigned to fly with “EDI” a robotic drone prototype plane operated by a computer brain that talks and learns as it goes.

After the team destroy a Rangoon high rise that houses a group of terrorists, the three pilots come under attack from their robotic “wingman” as the drone imitates the HAL robot from Stanley Kubrick’s “2001” on a single-minded mission of destruction. Even Sam Shepard is reduced to giving an uncharacteristic phoned-in performance. It’s sad to see that success has gone to Jamie Foxx’s head and that his fall from grace has already begun.

A small request: Help keep Cole Smithey writing reviews, creating video essays, and making podcasts. Click on the button to pledge your support through Patreon, and receive special rewards!  Thanks much pal!

Posted by Cole Smithey at 10:41:00 AM in Action/Adventure