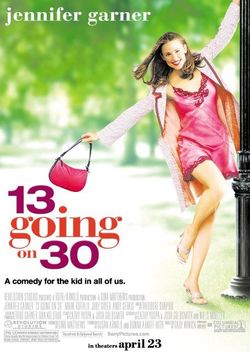 Jennifer Garner breaks character by forgetting that she’s playing an awkward  13-year-old girl in a 30-year-old woman’s body in this girly comedy based on the same plot conceits as “Big” (1988) and the more recent “Freaky Friday.” Overnight, Jenna-the-goofy teenager becomes Jenna-the-popular adult managing editor of a woman’s magazine when her young admirer Matt sprinkles ‘wish dust’ on her 13th birthday. Mark Ruffalo adds much needed ballast to the movie as the adult version of Jenna’s former friend Matt, whom she dumped to curry favor with her snotty girlfriends at her birthday party. The apocalyptic core of the movie is an ill-advised line dance sequence imitating the Michael Jackson “Thriller” music video. If that’s not enough to scare you, then you might just be young and girly enough to delight in director Gary Winick’s (“Tadpole”) middling attempt at teen comedy.
Rated PG-13. 97 mins. (C) (Two Stars)

Listed below are links to weblogs that reference 13 Going On 30: