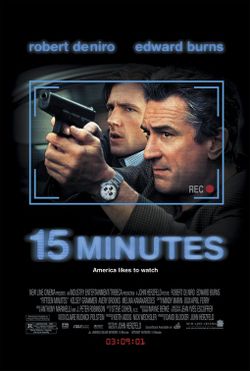 "15 Minutes" is a cops-and-killers action movie naively intent on telling you things you already know about the societal pitfalls of tabloid media. As the film’s title implies, the killers in the story want their slice of fame and fortune in return for the bloody murders they’ve committed. Emil and Oleg are a pair of Eastern European criminal clods feeding off information from daytime television tabloid talk shows to get off the hook for a laundry list of murder and arson. Eddie Flemming (Robert De Niro) is a high-profile New York City Homicide detective joined by arson investigator Jordy Warsaw (Ed Burns) to capture the idiotically diabolical perps. Every character is a cartoon cutout - see Jordy’s last name (‘Warsaw’ because he’s ‘Polish’ or ‘Emil Slovak’ from eastern Europe) and you get an idea of how writer/director John Herzfeld mapped his script. Herzfeld’s experimentation with breaking plot conventions can’t mask the film’s lacking impetus in his overall composition.
Rated R. 119 mins. (D+) (One Star)

Listed below are links to weblogs that reference 15 Minutes: