« Brokeback Mountain | Main | The Chronicles Of Narnia: The Lion, The Witch and The Wardrobe » 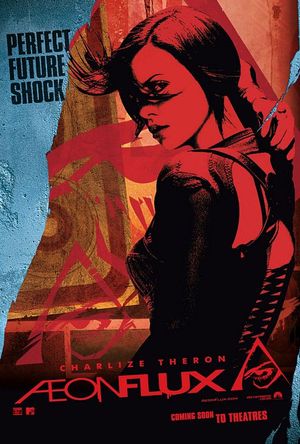 An at once flimsy and overwrought sci-fi plot set in 2415 finds the surviving 1% of the world’s population living in Bregna, a heavily surveillanced and sterile bubble city existing under a fascistic government. Aeon Flux (Charlize Theron) is a master assassin in a small group of freedom fighters called Monicans attempting to neuter a sinister government that randomly abducts and murders its citizens. Aeon (pronounced ee-on) is assigned by her group’s leader (a miscast Frances McDormand) to assassinate government head Trevor Goodchild (Marton Csokas) with the help of fellow rebel assassin Sithandra (Sophie Okonedo). But Aeon isn’t up to the task when memory pangs reveal that she and Trevor were once husband and wife in another life. Even Theron’s sexy catsuit acrobatics can’t prevent boredom from setting in as the film’s unimaginative production design and dull dialogue take precedence. Karyn Kusama (“Girfight”) directs this defective sci-fi thriller.
Rated PG-13. 92 Min. (C-) (Two Stars)

Listed below are links to weblogs that reference Aeon Flux: