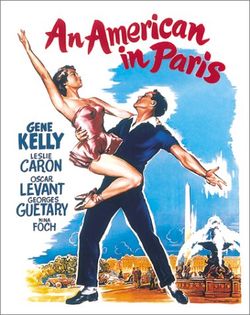 This musical precursor to the superior "Singing In The Rain," (also starring Gene Kelly) is marred by some iffy arrangements of Gershwin standards such as "I Got Rhythm" and "Our Love Is Here To Stay." The film's ridiculous 18-minute "ballet" that closes the festivities is the most ostentatious misappropriation of the form (ballet) ever done in cinema. Gene Kelly is impossibly charming as Jerry Mulligan, an American GI who remains in Paris after the war to study painting. Jerry's paintings catch the eye of a rich sponsor (Nina Foch) interested in all the Jerry she can buy, which turns out to be not too much when a young Leslie Caron steals Jerry's heart. George Guetary's singing scenes should have been left on the cutting room floor, but Gene Kelly and Leslie Caron are mesmerizing, and Oscar Levant is amusing as Jerry's piano playing buddy. "An American In Paris" (1951) swept the Academy Awards for Best Picture, Writing, Cinematography, Art Direction, Scoring, and Costume.

Listed below are links to weblogs that reference An American In Paris - Classic Film Pick: