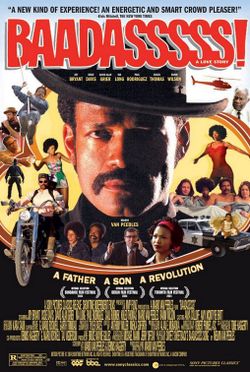 Writer/director/actor Mario Van Peebles ("New Jack City") creates a fascinating docudrama love letter to his father, Melvin Van Peebles, about his maverick dad's making of the groundbreaking independent blaxploitation film "Sweet Sweetback's Baadasssss Song (1971). There's no mistaking the revolutionary tone of the film's attention to the way blacks have been represented in the media, and the desperate measures necessary to rise above the prevalent oppression of minorities in this country. Although "Baadasssss" is by no means a perfect movie - it loses momentum half way through - it does successfully capture a spirit largely missing in American cinema today. Where are the modern John Singletons? See the brilliant "Boyz N The Hood" (1991) or Ivan Dixon's "The Spook Who Sat By The Door (1973) to see the tradition that Melvin Van Peebles original blaxploitation classic spawned.
Rated R 108 mins. (B-) (Three Stars)

Posted by Cole Smithey at 01:19:00 PM in Action/Adventure

Listed below are links to weblogs that reference Baadasssss!: