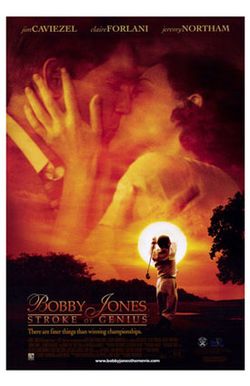 In going after a “Seabiscuit” type of movie about the famous ‘30s amateur golfer Bobby Jones, the filmmakers chose a double epithet for a biopic that gets nowhere near that film's captivating sports story from the same era. Jim Caviezel does a commendable job as Bobby Jones, the only golfer to ever win the four Grand Slam tournaments in the same year, but the story’s lacking dramatic arc, overlong running time, and dreadful musical score by James Horner make it a snoozefest to overlook. Jeremy Northam (“Gosford Park”) plays Bobby’s egotistical golf rival Walter Hagen with a sharp wit that elevates the movie whenever he’s onscreen, although Claire Forlani (The Medallion”) is severely miscast as Bobby Jones’ put upon wife.
Rated PG. 120 mins. (C) (Two Stars)

Listed below are links to weblogs that reference Bobby Jones, Stroke Of Genius: