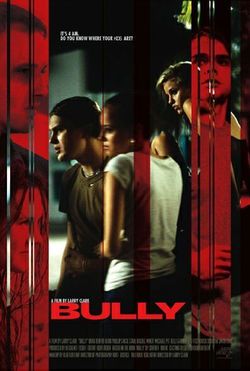 One part "Kids" and one part a nauseated spin-off of "Boys Don't Cry," "Bully" is an exploitation teen movie in the pejorative sense of the word. Loosely based on the 1993 murder of a South Florida teenager, director Larry Clark goes to laughable extremes in generalizing America's suburban teen lifestyle as filled with drugs, alcohol, pornography, sex, and lurking violence. As malcontent Marty Puccio, Brad Renfro tolerates constant humiliation and physical degradation from his best friend Bobby Kent (Nick Stahl), a closet homosexual and insufferable bully, until Marty's girlfriend Lisa (Rachel Miner) decides killing Bobby is the best solution. A group of excitable teens rally around the dubious idea, egging one another on, until they join in to commit the despicable murder. Larry Clark splashes teenage nudity and sexual intercourse around as so much cinematic hamburger helper.
Rated R. 106 mins. (C-) (Two Stars)

Listed below are links to weblogs that reference Bully: