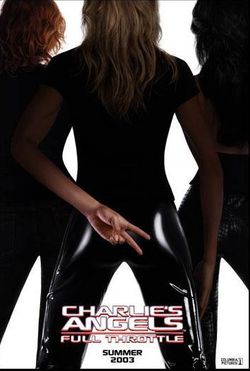 This hopelessly confused genre blender is surprising for its unfocused take on what a modern Hollywood cheesecake action comedy should be. There’s plenty of T & A, phony kung fu, silly sexual innuendo and more cameo secondary characters than you can shake a stick at. Luke Wilson, Matt LeBlanc, Bruce Willis and John Cleese pop up in wasted screen time that’s made all the more glaring by the spasmodic energy level of the film. Even as a girl fantasy flick, “Full Throttle” fails because the filmmakers are more distracted with bad music video set pieces than telling a story. Justin Theroux (“Mullholland Drive”) rises above his surroundings as out-of-control bad guy Seamus O’Grady.
Rated PG-13. (D-) (Zero Stars)

Posted by Cole Smithey at 10:37:00 PM in Action/Adventure

Listed below are links to weblogs that reference Charlie’s Angels: Full Throttle: