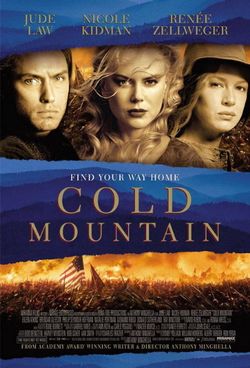 Only Renee Zellweger maintains a Southern accent in this laughable attempt by director Anthony Minghella (“The English Patient”) at filming Charles Frazier’s love story set amidst the turmoil of the Civil War. Zellweger acts circles around Nicole Kidman who plays a lovelorn woman-in-waiting to Jude Law’s wounded AWOL Confederate soldier. There’s hardly a believable character to be found as iconic actors like Donald Sutherland, Philip Seymour Hoffman, Natalie Portman, Giovanni Ribisi and Brendan Gleeson give contrived performances that fall as flat as their wretched accents. While Renee Zellweger errs on the side of caricature, as a drifter who helps Ada (Kidman) with her dilapidated farm, she chews up language and scenery like a seasoned pro. Jude Law (Inman) makes a strong showing in spite of his paltry Southern diction and Minghella’s heavy-handed direction. Filmed in Romania, Minghella’s version of the war torn South is about as a far from the Blue Ridge Mountains as Virginia is to the Transylvanian Alps.
Rated R. 155 mins. (C-) (Two Stars)

Listed below are links to weblogs that reference Cold Mountain :