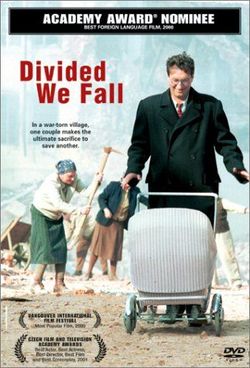 Czech director Jan Hrebejk received an Academy Award nomination for his heartfelt movie that observes the volatile conditions, desires, and moral obligations pressing on four people attempting to survive the Nazi occupation of their small Czech town. Because most of the action takes place between a husband and wife, their concealed Jewish house guest, and a former colleague who is a Nazi collaborator, the movie has the intimacy of a play, but retains a greater scope of the war around them through Hrebejk’s tempered command of cinema language. At times painfully suspenseful and claustrophobic, "Divided We Fall" is a vital reminder of the kinds of dramatic choices made by millions of peopled victimized by Nazis and traitors in a war that was fought at all costs.
Rated PG-13. 122 mins. (B) (Three Stars)

Listed below are links to weblogs that reference Divided We Fall :