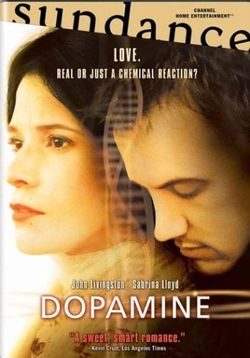 A trio of unlikable San Francisco tech nerds, led by Rand (John Livingston), attempt to scratch out a post dot-com existence with an artificial intelligence cartoon computer bird named Koy Koy that they created as a nursery school companion for kids. Rand’s clinical theories on Dopamine, the natural amphetamine that the human body produces when people fall in love, are tested when he gets the hots for Sarah (Sabrina Lloyd), a mentally unstable kindergarten teacher. First-time writer/director Mark Decena shows no flare for storytelling and even less insight into the demands of shooting on high-definition video. Though “Dopamine” won the 2003 Alfred P. Sloan Foundation prize at the Sundance Film Festival for outstanding independent films featuring science and technology, the movie is gut-wrenchingly awful and should be avoided at all cost.
Rated R. 84 mins. (D-) (Zero Stars)

Listed below are links to weblogs that reference Dopamine: