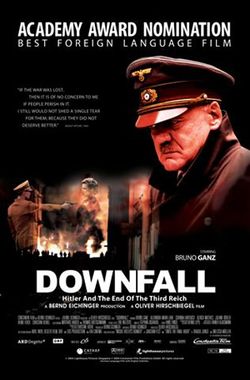 As the first German-made film about Hitler’s ruination since G.W. Pabst’s “Der Letzte Akt” (“The Last Act” - 1956) “Downfall” is a stunning cinematic achievement that illuminates minutiae about the last 10 days of the nefarious German leader who won the hearts of many and destroyed the lives of many more. Director Oliver Hirschbiegel (“The Experiment”) takes a clear-eyed approach to Bernd Eichinger’s impeccable script based on the books “Inside Hitler’s Bunker: The Last Days Of The Third Reich” (by Joachim Fest) and Traudl Junge’s memoir “Until The Final Hour: Hitler’s Last Secretary.” Swiss-born actor Bruno Ganz (“The Manchurian Candidate”) gives a tour de force performance as Adolph Hitler and leads a stellar cast of German thespian heavyweights. Most unmistakable in the film’s subtext is the deep contempt Hitler had for his own people whom he blamed for Germany’s failure and damnation due to their headlong support for him.
Rated R. 154 mins. (A) (Five Stars)

Listed below are links to weblogs that reference Downfall: