ETERNAL SUNSHINE OF THE SPOTLESS MIND Screenwriter Charlie Kaufman (“Adaptation”) takes the audience down a rabbit hole of his personal neurosis in this distressed story about Joel Barish (Jim Carrey), a confused dolt who falls for Clementine (Kate Winslet), a mean-spirited girl, best categorized as a bad animal.

Both members of their doomed relationship attempt to have their respective memories of the other person removed by an experimental psychiatrist.

Although some audiences will be captivated by the now-familiar American stereotype of a condescending bipolar female character, it’s Winslet’s incarnation of Clementine as a mentally volatile manipulator of weakness that makes the movie icky to the point of disgusting.

Poised as a romantic comedy, “Eternal Sunshine Of The Spotless Mind” is rarely funny. The film disintegrates into utter abstraction during its overlong running time. Here is the feel-crappy movie of the century. 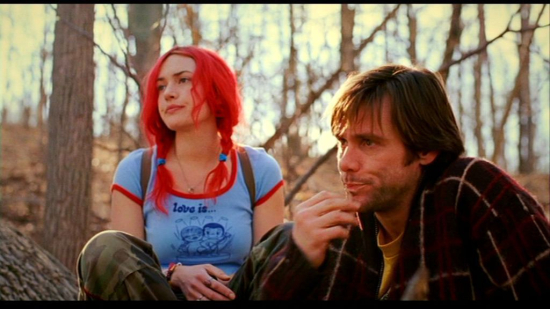 Call it cinema of emotional fascism. I never want to see this movie again, and wish I hadn't seen it in the first place. You'll get more entertainment staring at your navel, just as Charlie Kaufman and Michel Gondry have so clearly been doing for a cat's average lifespan.