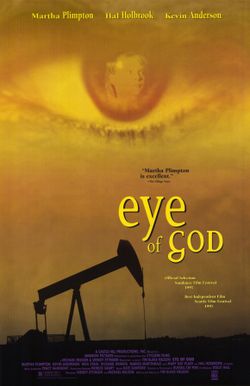 This moralistic debut film by writer/director Tim Blake Nelson contains strong ensemble performances by Martha Plimpton, Hal Holbrook, Kevin Anderson, and Nick Stahl, but eventually collapses under the weight of its predictable plot and life negating ending. Oklahoma small town diner waitress Ainsely DuPree (Plimpton) marries a recently released born again convict (Anderson) and falls into an inextricable relationship of deadly abuse. “Eye of God” presents an overly complex narrative puzzle placed amid an atmospheric setting with distracting voice-over narration by Holbrook’s town sheriff as he reflects on a tragedy that makes mute a local orphan played by Nick Stahl. Nevertheless, the movie has achieved a cult status due to the showcase nature of its rock-solid performances.
Rated R. 84 mins. (B-) (Three Stars)

Listed below are links to weblogs that reference Eye Of God: