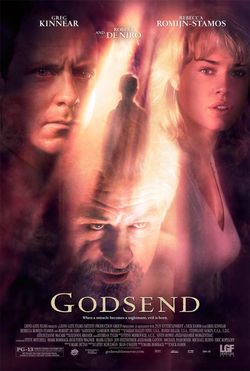 This dry and uneventful formula thriller drinks the life from expert cast that includes Robert De Niro, Greg Kinnear, and Rebecca Romijn-Stamos. Kinnear and Romijn-Stamos play a young married couple that suffers the death of their 8-year-old son Adam (Cameron Bright) in a freak accident. Ambulance chaser/stem cell genius Dr. Richard Wells (De Niro) approaches the couple at the boy’s funeral, offering to clone Adam back to life if they are willing to move to a remote town in Vermont and cut all other ties. The Adam clone is born but develops a nasty personality crisis after he passes the age at which his predecessor died. Adam’s split personality is all bark with very little bite that sends the couple on a crash course with the dubious doctor who gave them a defective clone in place of their son. “Godsend” suffers from a feeble plot, laughable dialogue, and thriller cliches that barely effect the characteristic jolts of the genre.
Rated PG-13. 102 mins. (D+) (One Star)

Listed below are links to weblogs that reference Godsend: