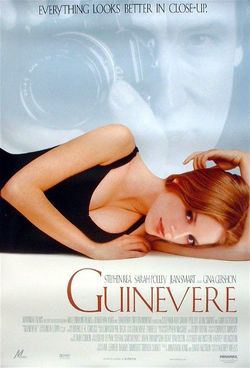 It doesn't take much to go from writer to director in Hollywood. Or so it seems by scripter Audrey Well's ("The Truth About Cats and Dogs") entrée to directing "Guinevere," her self-penned Pygmalion interpretation involving Connie Fitzpatrick (Stephen Rea), a fifty-something photographer and Harper (Sarah Polley), a 19-year-old misfit. The movie opens promisingly with Well's camera capturing soft artistic shapes and contours from a nude female body. The blue and gray colors promise a European art-house sensibility from the story about to unfold. Harper's voice-over narration tells us, "He was the worst man I ever met, or maybe the best. If you're supposed to learn from your mistakes, then he's the best mistake I ever made." That heavy dose of exposition delivers a key to the filmmaker's inability to show without telling the audience before hand what's going on. Wells is too insecure about narrative structure to avoid patronizing her subject, her actors, and her audience. "Guinevere is the kind of film which, if viewed under the wrong circumstances, is capable of putting its viewer off from watching movies for a very long time.
Rated R. 107 mins. (D) (One Star)

Listed below are links to weblogs that reference Guinevere: