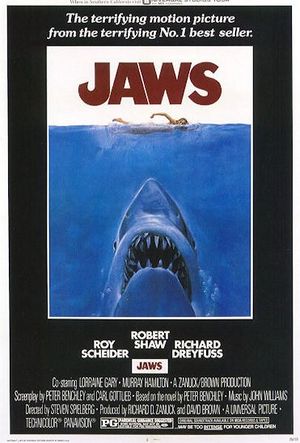 Stephen Spielberg's opening sequence of "Jaws" pushes Hitchcock's second act shocker from "Psycho" up to the start of a terrifying horror movie that also borrows from Hitchcock's other masterpiece "The Birds."

A sexy nude girl goes for a midnight swim in the pitch black ocean off Amity Island, where the most phallic of creatures lurks below. John Williams' pulsing musical score sends shockwaves of fear deep into the central nervous system of the audience. Suddenly all teetering apprehension erupts into sheer panic as the vulnerable girl is thrashed about in the open sea like a leaky rag doll by an unseen shark of enormous strength and fury. 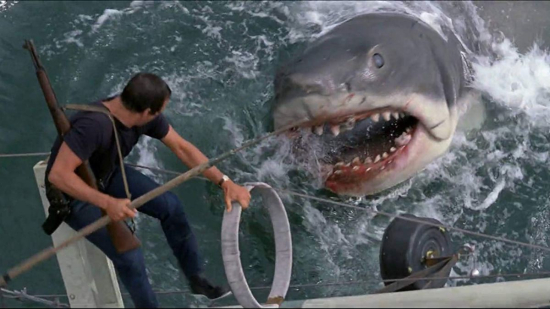 The tyranny of mother nature will return to attack children before the local police chief Brody (Roy Scheider) will call upon the salty dog shark hunter Quint (Robert Shaw) and a geeky oceanographer named Matt (Richard Dreyfus) to go after the vicious monster that threatens the livelihood of the resort town. In 1975 "Jaws" made Steven Spielberg a household name by delivering on an unpredictable primal threat and fear of the unknown.

For as many women who refused to take showers after seeing "Psycho," just as many or more stayed away from the ocean after seeing "Jaws." Peter Benchley's characters are exquisitely fulfilled by Scheider, Shaw, and Dreyfus, who carry out the literary portent of their archetypes to the letter.

In the end, the shark is a MacGuffin necessary for the men to bond and test themselves against what they fear most — their own mortality.