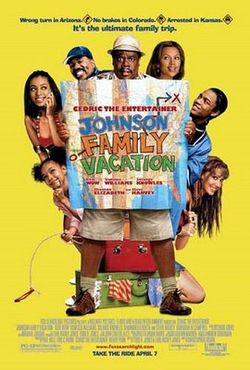 Cedric The Entertainer (“Barbershop”) takes the lead in this humorous but awkwardly assembled family comedy that centers on a disaster-filled cross-country road trip. Nate Johnson (Cedric) is so determined to beat out his brother Max (Steve Harvey) for the ‘family of the year’ award at their reunion that he’s made amends with his recently separated wife Dorothy (Vanessa Williams) to drive their three children from California to Caruthersville, Missouri for the event. Laughs sputter as Dorothy taunts Nate with empty promises of sensual pleasure that exacerbate his mounting anxiety while driving a freshly-outfitted SUV into repeated mishaps. Mechanical performances by Vanessa Williams and Bow Wow, as Nate’s musically inclined son, impair Cedric’s earnest comedic efforts in this spasmodic comedy.
Rated PG-13. 96 mins. (C) (Two Stars)

Listed below are links to weblogs that reference Johnson Family Vacation :