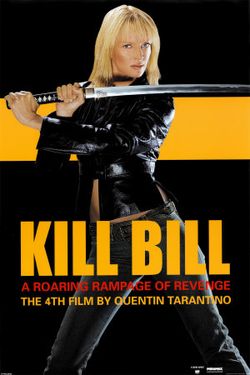 Although it's a gigantic shame that Miramax split Quentin Tarantino's long awaited 'kung-fu samurai Spaghetti Western love story' epic into two halves, "Kill Bill Vol. 2" pays off in spades as it completes the Bride's (Uma Thurman) trail of violent revenge to its promised conclusion with panache to spare. Characters are fleshed out much better in Vol.2 with David Carradine (as Bill), Michael Madsen (as Budd), and Daryl Hannah (as Elle AKA California Mountain Snake) burning up the screen in scenes that brim with suspense, surprise, and witty dialogue. With his signature use of impeccably hip music, Tarantino delivers a rich and tasty movie made up choice references to several genres of "grindhouse" films. "Kill Bill Vol. 2" is a movie-lover's movie through and through.
Rated R. 138 mins. (A) (Five Stars)

Listed below are links to weblogs that reference Kill Bill Vol. 2: