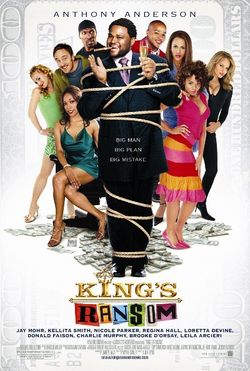 Malcolm King (Anthony Anderson – “Barbershop”) is an egotistical and wealthy head of a major ad company who hatches a plan to stage his own kidnapping in order to avoid splitting his net worth with his ex-wife Renee (Kellita Smith). The trouble is that two other factions have also planned to kidnap the much-reviled Malcolm King. This slapdash comedy barely coughs up more than a couple of funny scenes as the story moves in predictable fits and starts before sputtering out of fuel half way through. Regina Hall (“Paid In Full”) gives a standout performance as Malcolm’s dimwitted sexpot assistant and mistress. Jay Mohr is unimpressive as a half-witted malcontent who executes the kidnapping.
Rated PG-13. 95 mins. (C-) (Two Stars)

Listed below are links to weblogs that reference Kings Ransom: