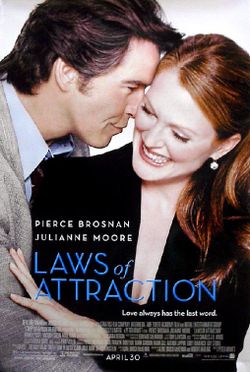 Pitched as a homage to George Cukor’s 1949 classic romantic comedy “Adam’s Rib” (with Katharine Hepburn and Spencer Tracy), “Laws of Attraction” is far separated from that film’s exceptional timing and sincere comic exploration of a competitive couple of married lawyers. Julianne Moore and Pierce Brosnan play two eligible New York divorce attorneys drawn together by mutual attraction and court cases. Where Hepburn and Tracy were an established married couple in “Adam’s Rib,” Moore and Brosnan have to play a losing game of catch-up in order to fall in love, get married, and still have a shot at longevity. It’s indicative of our time that the screenwriters couldn’t begin to fathom a couple of married lawyers without first explaining away the necessary undertaking of such a relationship. The divulged conflict resolution of Hepburn and Tracy as a committed couple is reduced to Moore and Brosnan trying to find a reason to be together in the first place.
Rated PG-13. 90 mins. (C) (Two Stars)

Listed below are links to weblogs that reference Laws Of Attraction: