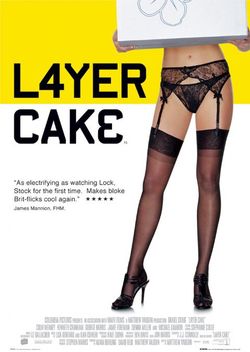 “Lock, Stock And Two Smoking Barrels” producer Matthew Vaughn turns director for this keen cinematic rendering of J.J. Connolly’s novel about a modern day British gangster attempting to get out of the business. Daniel Craig (“Enduring Love”) shows why he’s been in contention for taking over the James Bond mantle as his unnamed character traverses West London in search of his boss’s runaway junkie daughter while he attempting to settle a massive drug deal gone awry. “Layer Cake” is a stylized British noir full of clever twists, biting dialogue, and plenty of ironic violence.
Rated R. 144 mins. (B) (Three Stars)

Posted by Cole Smithey at 11:18:00 AM in Action/Adventure

Listed below are links to weblogs that reference Layer Cake: