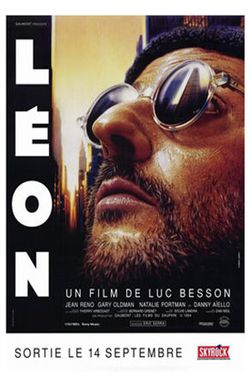 Between “La Femme Nikita” and “The Fifth Element” writer/director Luc Besson made a bold genre-breaking film about a stoic hit man (Jean Reno) who befriends a 12 year-old girl named Mathilda (Natalie Portman) after her family is brutally murdered by a crooked DEA agent named Stansfield (Gary Oldman). Originally released in America as a 26 minute shorter version than the director’s cut, the film made a deep impression on audiences with its forceful use of stylized violence pitted against Natalie Portman’s impeccability as a savvy New York girl seeking revenge on the man who killed her family. The movie launched Natalie Portman’s film career and her performance is as breathtaking as the contrast between Jean Reno’s studied stillness and Gary Oldman’s drug addled ferocity. “Leon The Professional” is a consummate hit man movie from the early ‘90s era in cinema when every young filmmaker wanted to be the next Tarantino. Luc Besson just had to be himself.
Rated R. 133 mins. (B+) (Four Stars)

Posted by Cole Smithey at 07:04:00 PM in Action/Adventure

Listed below are links to weblogs that reference Leon The Professional: