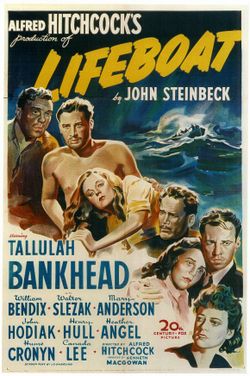 Alfred Hitchcock’s 1944 realization of a script started by John Steinbeck, and completed by Hitchcock, is an often overlooked cinematic treasure. Set in the claustrophobic confines of a lifeboat in the Pacific ocean, a group of eight survivors from a torpedoed freighter share their tiny vessel with the German commander responsible for their predicament. Hitchcock’s inventive use of cinema language to expand on the drama occurring within the limited confines of the boat is something to behold. Tallulah Bankhead steals the movie as a fur-wearing selfish journalist whose hair is barely ever out of place. Conceived as a wartime social satire, “Lifeboat” carries a boatload of conflicting ideologies that are still at issue today. Hitchcock's answer to the perpetual film school dilemma of making a movie on a boat as one of a filmmaker's biggest challenges, is a textbook example of how it's done right.

Listed below are links to weblogs that reference Lifeboat (Classic Film Pick):