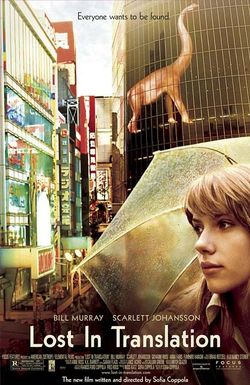 Scarlett Johansson vies for her 15 minutes as the new "it girl" in Sophia Coppola's subtle and sensitive sophomore directorial effort after her impressive debut film "The Virgin Suicides." Bill Murray plays Bob Harris, an aging American actor making high paying whiskey commercials for a few days in Tokyo when the close company of Scarlett Johansson catches him in midlife crisis. Charlotte (Johansson) is visiting Tokyo with her workaholic photographer husband John (Giovanni Ribisi) and can't resist killing time in the disorienting atmosphere with the elder Bob in her husband's absence. The movie is a deceptively simple study in unrequited attraction that succeeds in spite of minor problems with neglected sub-plots.
Rated R. 102 mins. (B+) (Four Stars)

Listed below are links to weblogs that reference Lost In Translation: