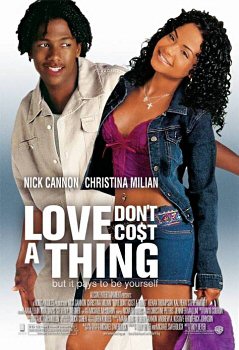 "Love Don't Cost A Thing" is loosely based on the 1987 teen comedy "Can't Buy Me Love," and fails to improve on that tepid movie by using a milieu of black high school students. Nick Cannon ("Drumline") plays Alvin Johnson a geeky working class high school senior who pays off the most popular girl in school to be his girlfriend for two weeks in order to gain popularity. You'll cringe more than you'll laugh as Alvin puts on feminine airs of being a hip member of the 'in-crowd' even as his super-cool R&B loving father baits him with the proper use of condoms. Christina Milian has all the appeal of a thumbtack as Alvin's girl of de sire Paris Morgan.
Rated PG-13. 100 mins (D) (Two Stars)

Listed below are links to weblogs that reference Love Don't Cost A Thing: