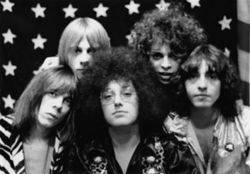 Documentary about the Detroit rock group “The MC5” (1964-1972) gives a comprehensive look at the rise and fall of one of the first bands to come under the intimidating eye of government and local authorities for their counterculture associations and attitudes. By starting their gigs with the shouted title of their anthem/motto “Kick Out The Jams Motherfuckers,” the MC5 incited a high level of excitement that their live shows fulfilled. Interviews with surviving members of the band (Wayne Kramer, Michael Davis, and Dennis Thompson) are pitched against archival footage and interviews that reverberate with today’s social upheavals in remarkable ways. The movie captures the gritty charisma of Detroit as it informed the quirky and colorful personalities of a band that many fans still remember today.
Not Rated. 119 mins. (B+) (Four Stars)

Listed below are links to weblogs that reference MC5: A True Testimonial :