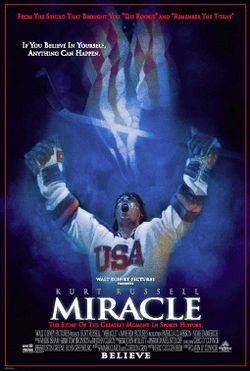 Director Gavin O’Connor (“Tumbleweeds”) makes a terrific sports movie about the extraordinary man who led the U.S. hockey team to win against the swaggering Soviet team at the 1980 Winter Olympics. Kurt Russell plays coach Herb Brooks with pitch-perfect restraint, empathy, and tough-as-nails directness as he doggedly trains his group of boys to play a different kind of hockey game. Eric Guggenheim’s balanced script contributes to the success of a sports film that transcends the genre by focusing on character, relationships, and social conditions surrounding the well-executed games. Even if you don’t know a “blue line from a clothes line,” “Miracle” is a thoroughly enjoyable film that unspools like a Robert Altman movie where many characters’ individual essences are revealed at once.
Rated PG. 135 mins. (A-) (Four Stars)

Listed below are links to weblogs that reference Miracle: