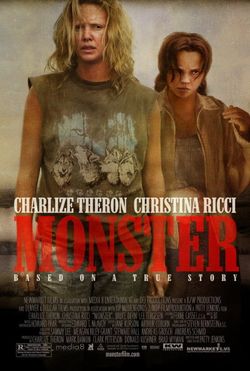 Charlize Theron gives her finest performance yet in the unlikely role of serial killer Aileen Wuornos in this riveting depiction of the Florida prostitute’s decent into madness. Debut writer/director Patty Jenkins proffers a finely balanced film that gives insight into the conditions, events and personality traits that sent the suicidal Wuornos into the arms of a lesbian lover (Christina Ricci), and then into a killing spree that would leave six men dead. Christina Ricci is commanding as Aileen’s troubled girlfriend Selby Wall, and Bruce Dern does a compelling turn as a secondary character. But it’s Theron who owns the film in an unflinchingly ugly role that demonstrates the actress’s mastery of her craft.
Rated R. 111 Mins. (A) (Five Stars)

Listed below are links to weblogs that reference Monster: