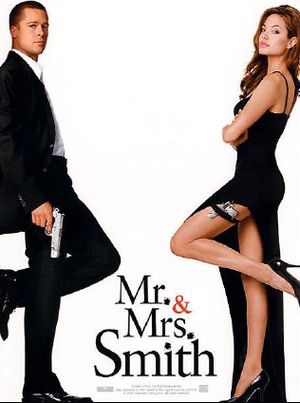 The attractive onscreen union of Brad Pitt and Angelina Jolie is the only thing "Mr. & Mrs. Smith" offers an audience beyond a relentlessly repetitive series of gunfights and car chases. So many bullets are fired you feel like you’re witnessing a full-blown war. John and Jane Smith are a married couple of hired assassins who have managed to keep their similar occupations concealed from one another until a double-booked hit pits them against each other. Much destruction of shared personal property occurs before John and Jane team up to battle against their many well-armed attackers. The movie is a pornography of violence that plays out like a remotely operated video game spattered with droll asides and sarcastic marital exchanges.

"Mr. & Mrs. Smith" was written by the untalented screenwriter Simon Kinberg ("XXX: State Of The Union") as a thesis for his master’s degree at Columbia University. The script reeks of a nerdy college student using inside humor to impress his friends. Jane’s female-run "Assassination Corporation" is located on the upper floors of the Empire State Building while her husband John’s hit-for-pay offices are stuck in a grungy garage. Jane works with a team of badass hotties. John plays second fiddle to a mama’s-boy boss Eddie (Vince Vaughn), who lives in a squalid house with his offscreen mother. Eddie has quick fire jokes galore, but Jane’s comrades-in-execution are all business. This meager background of superficiality is all that supports John and Jane’s extended divorce discussion. 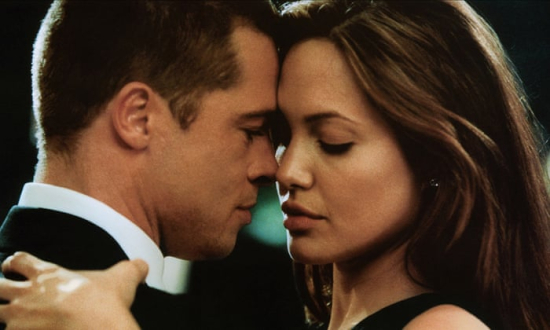 For her part, Jane is more cold-blooded than John. She makes several very sincere attempts at killing him. John, on the other hand, is more caring and far less willing to see any real harm come to the woman he comes home to every night for dinner at seven. The screenwriters bookends the movie with direct-to-camera couple’s therapy sessions that play out like high-quality demo reels for Pitt and Jolie. They answer an unseen interviewer’s spicy questions with evasive responses. The segments are lightly amusing. They could have helped reduce the monotony of the movie had more been used as time-out therapy visits for the couple of "five or six years" to voice their mutual aggression.

The highlight of the movie, for Jolie’s equally distributed male and female fan base, comes when she poses as a dominatrix prostitute to get close to her mark in the privacy of a plush Manhattan hotel room. Beneath a stylish raincoat, Jolie wears fishnets and a shiny black corset that becomes the stuff of fantasy fulfillment on her tall feline frame. Director Doug Liman ("The Bourne Identity") indulges the goofy naughtiness of the scene as Jolie straddles her prey with riding crop in hand before ending his life on a festive note. Jolie’s "Wild Wild West"-styled window descent from the high rise hotel to a busy sidewalk far below, via a cable-extending purse, closes out the scene with appropriate panache. It’s the one set piece that works because it riffs on Angelina Jolie’s infamous appetite for fetish while giving her character an appropriate cartoon quality of caviler physical prowess. 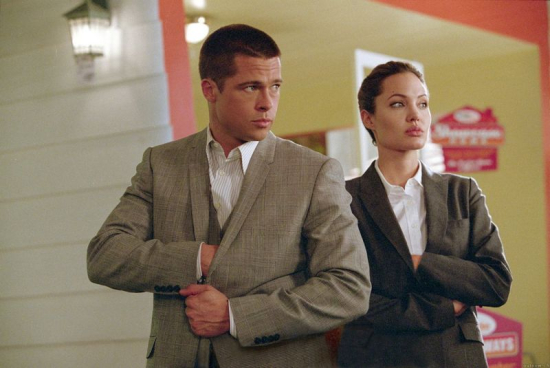 The film toys with role reversals wherein Jane represents a pants-wearing  male stereotype. John fills a sensitive female cliché, attempting to reconcile with his violence-prone partner. The story proposes that by attempting to kill one another, the couple discover the previously obscured source of their mutual attraction. This problematic narrative sphere could potentially have been made to work if the screenwriter had paid considerably more attention to the relationship at the heart of the romantic comedy aspect of the story. 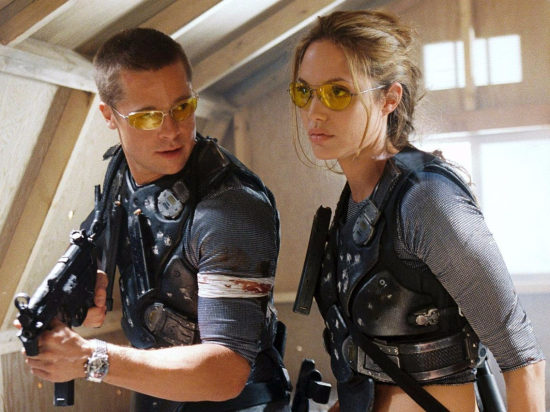 "Mr. & Mrs. Smith" becomes a chore to sit through as soon as the short-lived glamour of its attractive stars succumbs to a flimsy storyline. Audiences will have to take responsibility for editing the movie themselves by walking out at the 95-minute mark.

Posted by Cole Smithey at 11:08:00 AM in Action/Adventure