Once Upon A Time In Mexico 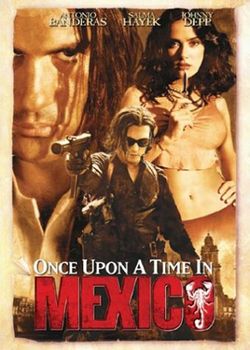 Writer/director Robert Rodriguez returns to the El Mariachi storyline that launched his career in this third fast and loose installment. Its convoluted narrative, about a corrupt CIA agent (Johnny Depp), a grudge-carrying ex-FBI agent (Ruben Blades), a cruel cartel boss (Willem Dafoe) and simmering political revolution, are mere window dressings for the shoot ‘em up action that sends people flying across the screen every five minutes. Antonio Banderas reprises his role as the guitar-toting assassin from “Desperado,” this time hired by Sands (Depp) to subvert an attempted coup against the president of Mexico. Rodriguez pays homage to Sergio Leone’s spaghetti westerns and Sam Peckinpah’s lust for bullets, but with an added ribbing of postmodern humor. The result is a cartoonish action movie that entertains without garnering empathy for any of its characters, with the exception of Ruben Blades’ Jorge.

Posted by Cole Smithey at 06:49:00 PM in Action/Adventure

Listed below are links to weblogs that reference Once Upon A Time In Mexico: