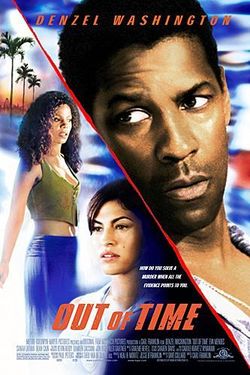 This generically titled mystery thriller is slow to catch on but holds joyous moments of suspense once it kicks in. Matt Whitlock (Denzel Washington) is a small town police chief on the gulf coast of Florida who is busily having an affair with another man’s wife while he waits out the last days until his own separated wife files divorce papers. But when Matt’s girlfriend Ann (Sanaa Lathan) discovers that she is dying from cancer, Matt takes desperate measures to get the cash to send her to Switzerland for special medical treatment. Apparent murder, theft, and a million-dollar life insurance policy get Matt hopping like a Mexican jumping bean on a hot pan as his detective wife (Eva Mendes) and his medical examiner friend Chae (John Billingsly) converge on the answers behind Matt’s actions that made him run out of time.
Rated PG-13. 105 mins. (C) (Two Stars)

Listed below are links to weblogs that reference Out of Time: