« Kings Ransom | Main | THE HITCHHIKER'S GUIDE TO THE GALAXY » 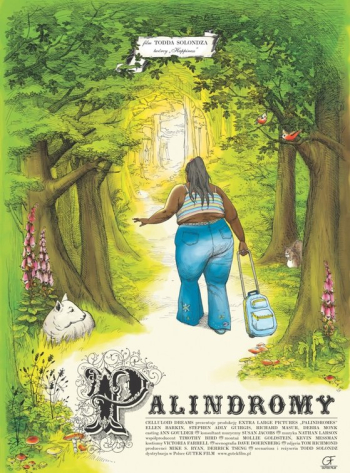 A multitude of anomalous actresses portray a 12-year-old girl named Aviva (reference “palindrome”) who wants so badly to be a mother that she runs away from her worthy home to allow various males to have their way with her. “Palindromes” is a sloppy and muddy film that uses the shock value of seeing adult men humping numerous underage girls as its recurring visual device inscrutably linked to an unclear abortion issue theme. Like filmmaker Larry Clark (“Kids”), Solandz uses the subject of pedophilia to prop up his irrelevant contribution to cinema and, like Clark, he should not be allowed to ever make another film. To see this delicate type of subject matter handled in a dramatic and significant way, see Grag Araki’s miraculous “Mysterious Skin.”