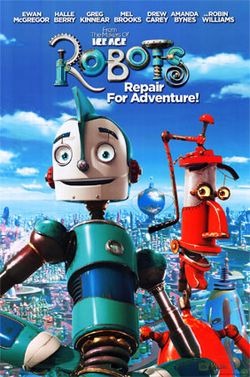 "Robots" is a well-written computer generated animated children's comedy that expresses subtle commentary on the industrial and corporate revolution with a visual scale that derives from an Orwellian sense of ethics. "Ice Age" director Chris Wedge and co-director Carlos Saldanha work from a polished script by the acclaimed screenwriting duo of Lowell Ganz & Babaloo Mandel ("City Slickers") to create a slapstick brand of humor with retro styled robots attempting to save their species from being outmoded by slash and burn capitalism. The movie's admirable theme, that there are things more important than profit, comes across under the virtuoso visuals that peak when endless falling dominos turn into a veritable ocean of the little black blocks being surfed by a robot. Ewan McGregor, Halle Berry, Greg Kinnear, Mel Brooks, Drew Carey, Jim Broadbent, Amanda Bynes, Robin Williams, Dianne Wiest and Paul Giamatti perform exceptional vocal characterizations for the "Bots."
Rated PG. 90 mins. (B+) (Four Stars)

Listed below are links to weblogs that reference Robots: