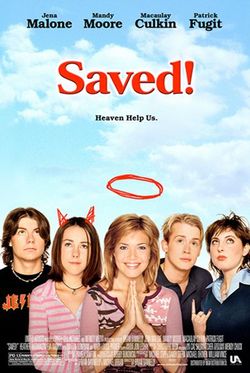 "Saved!" starts out as a feisty satire on organized religion but sputters in its third act to an apologetic footnote for all that has come before. The inviting plot is set in the social circles of a Christian (Baptist) high school where Jesus-loving senior Mary (Jena Malone - "Cold Mountain") accidentally gets pregnant attempting to cure her gay boyfriend Chad (Dean Faust) of his gayness. Chad is sent to a Christian center for re-programming, while Mary's fake friend Hilary Faye (Mandy Moore - "Chasing Liberty") is busy attempting to convert Jewish bad girl rebel Cassandra (Eva Amurri) into a saved Christian. Debut writer/director Brian Dannelly never pays off on the promise of film's independent thinking protagonist Cassandra, and one suspects that the studio imposed some changes to Dannelly's original script, which was co-written with newcomer Michael Urban.
Rated PG-13. 93 mins. (C)

Listed below are links to weblogs that reference Saved! :