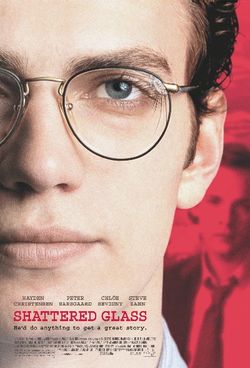 Journalistic ethics are scrupulously explored in this crystal-clear dramatization of real-life “New Republic” feature writer Stephen Glass’s meteoric rise and rapid dissolution over falsified articles he wrote for the publication during the mid ‘90s as a staff writer. Hayden Christensen is impeccable as Glass, an insecure writer desperate for adulation at any cost. Peter Sarsgaard gives a sensational performance as Glass’s pragmatic editor Chuck Lane. Produced by Tom Cruise’s company Cruise/Wagner “Shattered Glass” is a perfect example of a truly great Hollywood film where story and character advance a recognizable theme. Screenwriter Billy Ray makes an impressive directorial debut in this story based on a Vanity Fair article by Buzz Bissinger.
Rated PG-13. 103 mins. (A-) (Four Stars)

Listed below are links to weblogs that reference Shattered Glass :