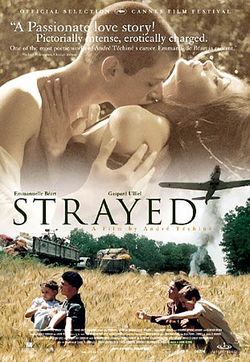 Andre Techine, maestro of the French New Wave directors, tells a seductively simple story of survival set on the outskirts of German occupied Paris in June of 1940. Odile (Emmanuelle Beart - "Mission Impossible") and her two children flee into the vacant French countryside when German Stukas strafe their convoy heading south. As refugees in their own country, Odile and her children, aged seven and twelve, take up residence in an abandoned country house with the aid of a Yvan (Gaspard Ulliel), a strange teenage boy they meet in the woods. As Odile attempts to block out unknown dangers by enforcing order in the house, her romantic attention turns to the mysterious boy that at turns protects or endangers her and her children.
Not Rated 95 mins. (B) (Three Stars)

Listed below are links to weblogs that reference Strayed (Les Egares) :